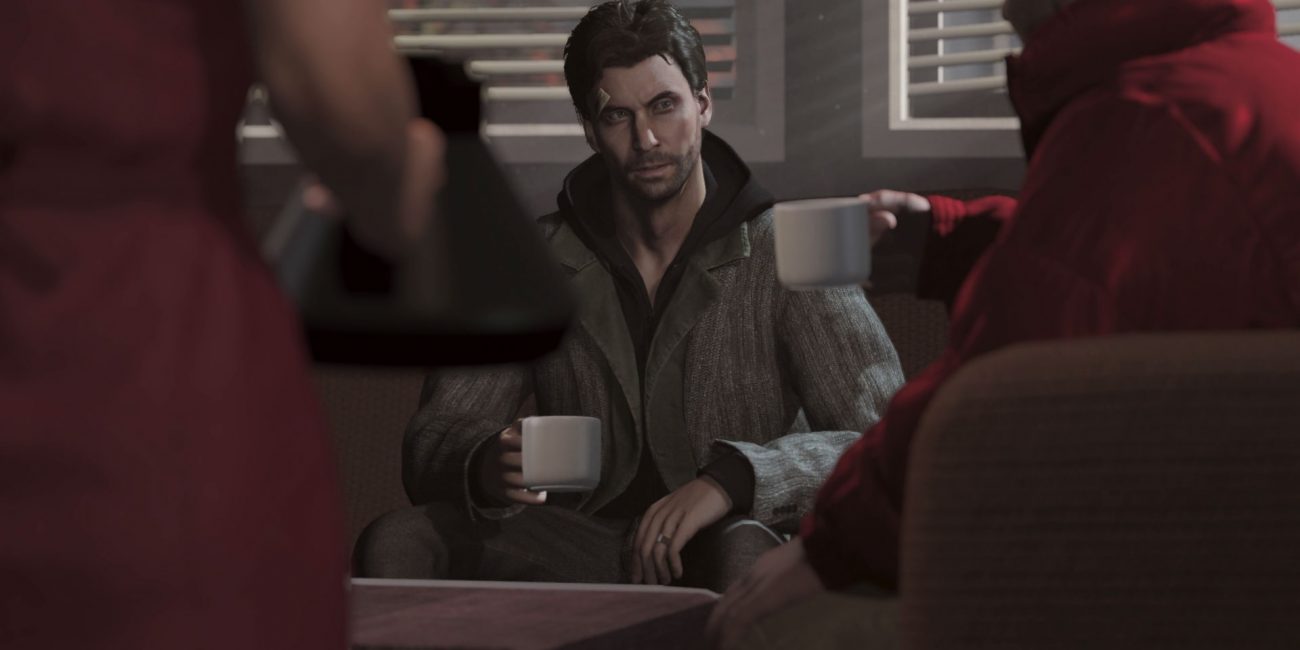 Alan Wake is a critically acclaimed cinematic thriller inspired by classic works of horror, with a deep mystery at its core. The game is from Remedy Entertainment, the creators of the award-winning Control.

The best-selling writer Alan Wake’s wife Alice mysteriously vanishes on their vacation to the idyllic town of Bright Falls. As Wake begins to find pages of a thriller he doesn’t remember writing, Bright Falls becomes much more sinister. A malevolent dark presence begins possessing the townspeople and taunting Wake, driving him to the brink of sanity as he tries to unravel a deepening mystery and find Alice.

What is Alan Wake Remastered?

Alan Wake Remastered is a remastered version of the original Alan Wake (2012 PC version). For fans of the original, it’s a new refreshed experience of the game they love. For newcomers, it’s a great way to experience the classic Alan Wake on new platforms taking advantage of next-generation technology.

The remaster contains the original game as well as The Signal and The Writer DLCs, which were originally sold separately, but are part of the Alan Wake Remastered package. The main game contains a brand new developer commentary track from game’s writer and creative director Sam Lake that fans will not want to miss.

Have you changed some of the content in the remaster?

It is the same game as before. The graphics have been improved and the front-end has been refreshed to look more modern. We feel the original game on the PC still looks good thanks to the excellent art and style of the game, but the upjump in resolution and frame-rate definitely elevate the remastered experience.

What can we expect from the new commentary track in the remaster?

We have recorded a brand-new audio commentary track for Alan Wake Remastered, featuring Sam Lake, the lead writer on Alan Wake and creative director at Remedy. The commentary features a deeper dive into the narrative of the game and the creative process involved in writing for Remedy’s games.

You can turn on the commentary from the Options menu and it triggers automatically as you progress through the game.

What platforms is Alan Wake Remastered coming out on?

Alan Wake Remastered is coming out (take a deep breath) on PC on the Epic Games Store, PlayStation 5, PlayStation 4/Pro, Xbox Series X|S, Xbox One, Xbox One S and Xbox One X.

If I buy the game for one console platform, like the PS4, do I get the PS5 version for free?

Yes. Buying the game on a single platform will give you access to all versions of Alan Wake Remastered on that platform.

If I buy a PS4 disc version, can I upgrade to PS5 digital version later down the line?

If I buy an Xbox One disc, can I get an Xbox Series X|S digital upgrade?

What are the main technical features of Alan Wake Remastered?

As this is a remaster built on the existing Alan Wake engine and technology, adding in ray tracing / HDR support was deemed too time-consuming. This would have taken resources away from other critical areas.

We are confident the game looks great even without ray tracing / HDR support.

What are the PlayStation 5-specific features?

How big of a download am I looking at with this game?

How does Alan Wake Remastered take advantage of the DualSense controller?

As Alan said, “I squeezed the flashlight like my life depended on it, willing it to stop it coming any closer. Suddenly, something gave, and the light seemed to shine brighter.”

The PlayStation 5 version of Alan Wake Remastered supports the PlayStation 5’s DualSense controller’s vibration and haptics. The left trigger aims Alan’s flashlight and the harder you press, the more intensity the flashlight will have.

The right trigger is used to shoot weapons, but there’s a clear difference in tactile feedback and resistance when using a pistol versus a rifle.

What are the PC min / recommended specs for Alan Wake Remastered?

Do save games carry over from PS4 to PS5 / Xbox One to Xbox Series X, etc.?

If you have a PlayStation 4 save game on your PlayStation 5, the game will auto-detect this and upon booting up, ask if you want to continue from this save game. To bring a save game from the PS4 to PS5, if you have an active PlayStation Plus subscription, you can use the cloud save storage to get your save game over to the PS5. The manual old-school method is that you copy the saves from a PS4 to an USB stick and import them onto your PlayStation 5. Fingers crossed!

You cannot “downgrade” a save game, meaning you cannot use your PS5 save game to continue playing on the PS4.

Who developed the original Alan Wake?

The original Alan Wake was developed by Remedy Entertainment. It was released on Xbox 360 in May 2010 and on PC in the fall of 2012.

Who are Remedy Entertainment?

Remedy Entertainment is a video game developer of some merit based in Finland.

Remedy Entertainment Plc is a globally successful video game company known for story-driven and visually stunning console and computer games such as Control, Alan Wake and Max Payne. Founded and based in 1995 in Finland, the company employs over 280 game industry professionals from 27 different countries. Remedy is listed on the Nasdaq First North Growth Market Finland marketplace. For more information: www.remedygames.com

Who is the co-developer behind Alan Wake Remastered?

d3t, a UK-based studio specializing in remasters in collaboration with Remedy. You can read about d3t more at: https://d3tltd.com/

Several of the key Remedy developers who were creating the original Alan Wake, like the Chief Technology Officer and VFX lead, are involved in the creation of Alan Wake Remastered.

Why did you not go for a full-on remake?

The plan has always been more about introducing Alan Wake to new audiences rather than remaking the game. We are still quite happy with the game a decade later.

Nightmare difficulty will only unlock after the game is completed once.

Have you changed or improved the gameplay compared to the original?

We have not touched the gameplay.

From the outset, we decided that this is a remaster and not a remake. While there were some frustrations  with the original game’s gameplay (things like Alan often being out of breath when running), we feel these are part of the original Alan Wake experience and haven’t changed them.

There are natural gameplay benefits from a smoother framerate and higher resolution, as well as, for example, the improved rumble and haptics in PS5 and Xbox Series X|S controllers that improve immersion.

Are the Achievements and Trophies the same as in the original game?

Do I really have to pick up 100 thermoses for an Achievement/Trophy… ?

Is there a digital and physical release?

Yes. Alan Wake Remastered is being released both digitally and via disc / physical retail. There are no content differences between the digital and disc versions.

What languages will be supported?

Is this a remake or a remaster?

The plan has always been more about introducing Alan Wake to new audiences and platforms, rather than remaking a game that we are quite happy with a decade later. Alan Wake has not been available for PlayStation platforms at all before this.

What is the release date of Alan Wake Remastered?

Tuesday, October 5th, 2021 across all platforms.

Who is publishing Alan Wake Remastered?

What is the retail price of Alan Wake Remastered?

To all of you getting ready to start your journey in Bright Falls,  Thank you!

Alan Wake Remastered reemerges from the darkness on October 5th
We use cookies and similar technologies to offer you personalized experience when using our website and to recognize the visitors and to remember their preferences. We also use them to measure ad campaign effectiveness, target ads and analyze site traffic. Some of the cookies we use are necessary to help our website work properly. Other cookies we use are optional but support us, our partners and your experience in the website other ways, if you decline their use, our website may not work in an optimal way.
By clicking the “accept” button, you consent to the use of all the cookies. However, you may visit Cookie Settings to provide controlled consent. You may also manage the choices available and reject the cookies at any time by going to “cookie settings “ at the bottom of any page.
Cookie settingsACCEPT
Manage consent

This website uses cookies to improve your experience while you navigate through the website. Out of these cookies, the cookies that are categorized as necessary are stored on your browser as they are essential for the working of basic functionalities of the website. We also use third-party cookies that help us analyze and understand how you use this website. These cookies will be stored in your browser only with your consent. You also have the option to opt-out of these cookies. But opting out of some of these cookies may have an effect on your browsing experience.
Necessary Always Enabled
Necessary cookies are absolutely essential for the website to function properly. These cookies ensure basic functionalities and security features of the website, anonymously.
Functional
Functional cookies help to perform certain functionalities like sharing the content of the website on social media platforms, collect feedbacks, and other third-party features.
Performance
Performance cookies are used to understand and analyze the key performance indexes of the website which helps in delivering a better user experience for the visitors.
Analytics
Analytical cookies are used to understand how visitors interact with the website. These cookies help provide information on metrics the number of visitors, bounce rate, traffic source, etc.
Advertisement
Advertisement cookies are used to provide visitors with relevant ads and marketing campaigns. These cookies track visitors across websites and collect information to provide customized ads.
Others
Other uncategorized cookies are those that are being analyzed and have not been classified into a category as yet.
Save & Accept